It’s proven that a combination of plyometrics and high-intensity, on-bike intervals build on bike power quickly and effectively. Plus, it’s fun! ALP Cycles has 2 Power phases that include plyos and on bike sprints.

We couldn’t have said it better than Chris Carmichael- “Plyometrics are jumping exercises targeted at making your muscles exert maximum force faster. This is more important for cyclists than pure strength, because with strength you can push a big gear, but with power you can push the same gear faster, which means you go faster. Plyometrics also help large muscle groups work with greater synchronicity, and enhance balance and coordination–important benefits you don’t get from traditional, muscle-isolating weight-lifting. ” 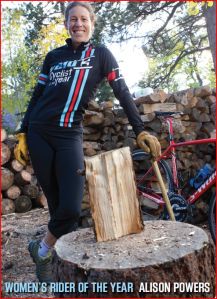 T-Shirts! Alison and Shawn showing off our much anticipated arrival. 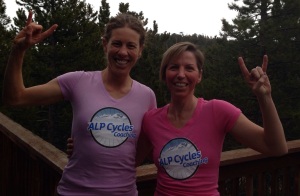 “This is a big step for ALP Cycles Coaching and I’m really excited,” said Powers, who as the founder and President had previously been coaching solo. “With the addition of Shawn’s experience and understanding of the sport of cycling from the perspective of a very beginner rider to a world class racer, ALP Cycles Coaching will now be able to offer advanced power analysis and scientific coaching based on real world experience and results.”